This article is a stub. You can help Shelter The Game Wiki by expanding it. 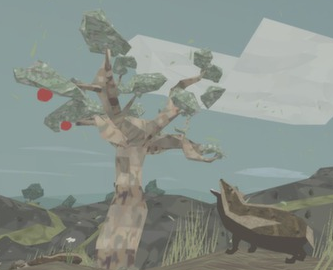 Vegetables and fruits are items obtained by scavenging or ramming into trees. You grab them with the action button.

Apples: You can find them on trees, and you can make them fall by charging at the trees to knock them down. They normally appear in almost all trees, normally one or two appear per tree.

Carrots: You can find the carrots on the ground. Feeds one cub.

Radishes: You can find the radishes on the ground. Feeds one cub.

Turnips: The turnips are the most common food in the game, found nearly everywhere. Feeds one cub.

Prey is obtained by attacking and killing another animal. You catch it with the action button.

Frogs: Easiest prey to catch and will feed one cub. Located around water sources.

Moles: Lightly harder than frogs to catch and will feed one cub. Near small burrows.

Foxes: Hardest prey to catch, stealth, and speed is needed. Will feed all cubs. Found in levels one, three, four ,and five.

Prey is obtained by attacking and killing another animal. You catch it on contact.

Vole/Mole: Found on open fields and easy to catch. Feeds one cub.

Frogs: Found by rivers or swamps and easy to catch. Feeds one cub.

Nests: Nests are bird nests filled with eggs. Feeds all of your cubs, but not by much. You can find it trees with owls hooting and on the ground near swamps.

Rabbits: You can sneak near them but once you get close they will start running, signified by a squeak. You can catch up to them but they will make sharp zig-zagging turns that you can predict. You automatically catch them by running into them. Feeds two cubs, the main source of food.

Deer: Harder to catch. Feeds all your cubs by a significant amount. You need to jump at them without any prey in your mouth. You can catch up with them but they are fast. They run in a straight line.

Foxes: Predator that can take one of your cubs when they are still small. Will sneak around for a chance to catch a cub. You can catch them by running into them. Feeds all of your cubs.

Pheasants and Grouses: Runs upon detecting you, and will eventually fly away. You can catch them by running into them. Feeds three cubs.

Eagles: While they are predators, they can be caught once they have taken a cub by jumping at them, but if you take too long, you can lose the cub. Eagles feed all of your cubs.

Prey is obtained by attacking and killing another animal. It is caught by contact.

Butterflies: The first prey you will get. Simply wait till they are near the ground and jump at them. They are easy prey who do not care about the player bein close, but will try to avoid you.

Frogs: These are located by the swamps, rivers, and lakes. They can be caught by jumping at them, but beware that they know you are there. They will jump away when following them if you want to get them without chasing just crouch and follow them until you decide it's close enough.

Eggs: These are located by goose swamp. They cannot be caught and will not avoid or do anything if you come to them, but there is a risk of losing your prey since there is a mother goose usually nearby! Carefull with her.

Birds: Birds are by the bear area and the bear's den area, they are caught by running into them or jumping at them.

Apples: by goose swamp, easily got, and can not be caught. They are usually by the apple trees.

Berries/Juniper: By the bear area and everywhere. You cannot catch it. Your bear friend loves them, he will even eat the bushes full of them, making it easy for you to pass.

Community content is available under CC-BY-SA unless otherwise noted.
Advertisement